Welcome to the world of one-place studies! Twenty-six of our members are sharing something in their particular place for this year's A-Z Blogging Challenge. Starting us off with the letter A, it's Jacqui Kirk and the study of Leamington Spa.

When visiting a tourist spot such as Leamington Spa we see only those features which have survived, and only hints of what has gone before. In My Place, the Upper Assembly Rooms, the scene of many a dalliance, were demolished in the 1870s, leaving barely a trace. 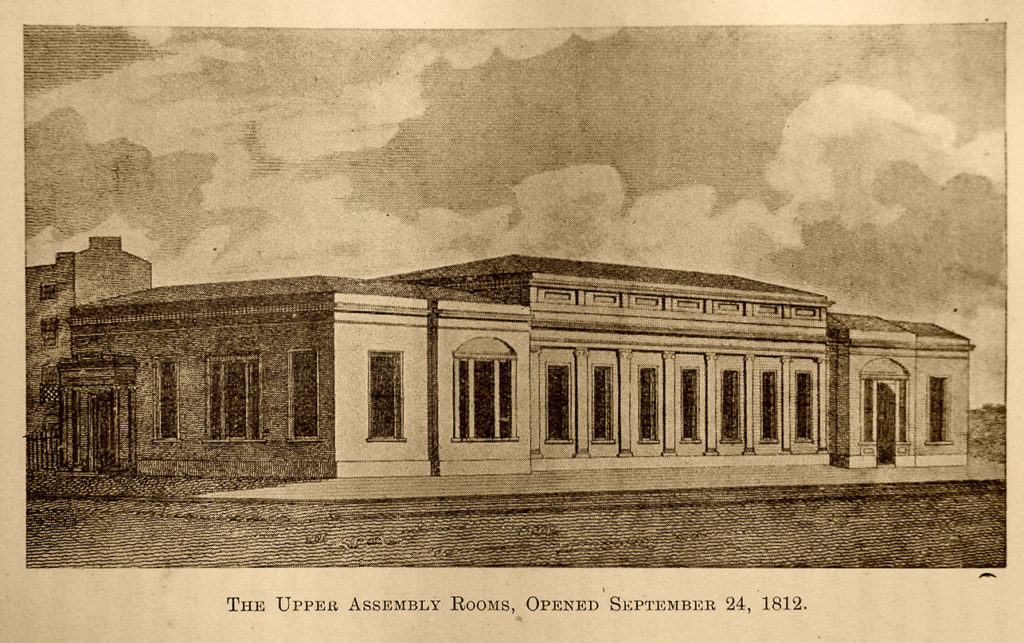 Formerly the hamlet of Leamington Priors and known in a small way for its healing waters, it grew exponentially into a fashionable Spa and resort town by the beginning of the 19th century. Having two "Seasons" - Summer (May to September) and Winter (based around foxhunting and horseracing and beginning in November) - the fashionable world flocked to partake of Leamington’s waters and entertainments in the early part of the 19th century. These arrivals were announced in the London and local newspapers and among them were the Prince Regent, the Princess Augusta, the Duke of Wellington, and the young Princess Victoria.

Leamington actually boasted two Assembly Rooms in the 1820s, as well as the Pump Rooms and numerous baths and entertainments. The New Assembly Rooms were in Bath Street in the older part of the town, and opened in 1821, and the more established Upper Assembly Rooms, built in 1812, were in the New Town up the hill from the River Leam on a corner plot between what is now Regent Street and The Parade.

Most sizable towns had Assembly Rooms at this period (Elizabeth Bennet met Mr Darcy in Jane Austen's "Pride and Prejudice" at a ball at the local Assembly Rooms.) Here the better off folk held their balls - although not all were exclusively used for this, being also used for town business and as court rooms. Not that many survive today.

In Leamington the Upper Assembly Rooms had its "Master of the Ceremonies" who was an influential figure in the town. Its first M.C. was poached from Bath, Mr. James Heaviside, who in fact returned there, to be succeeded by a Captain Charles Stevenson, a half pay Marine Officer. When Stevenson retired due to ill health in 1821 he was succeeded by "Captain" Francis Stenton, a half-pay Lieutenant in the 35th Foot who was, like many of his kind, in need of a bit of extra income now the Wars were over. It is Francis Stenton who seems to have codified the Rules for the Assembly Room: 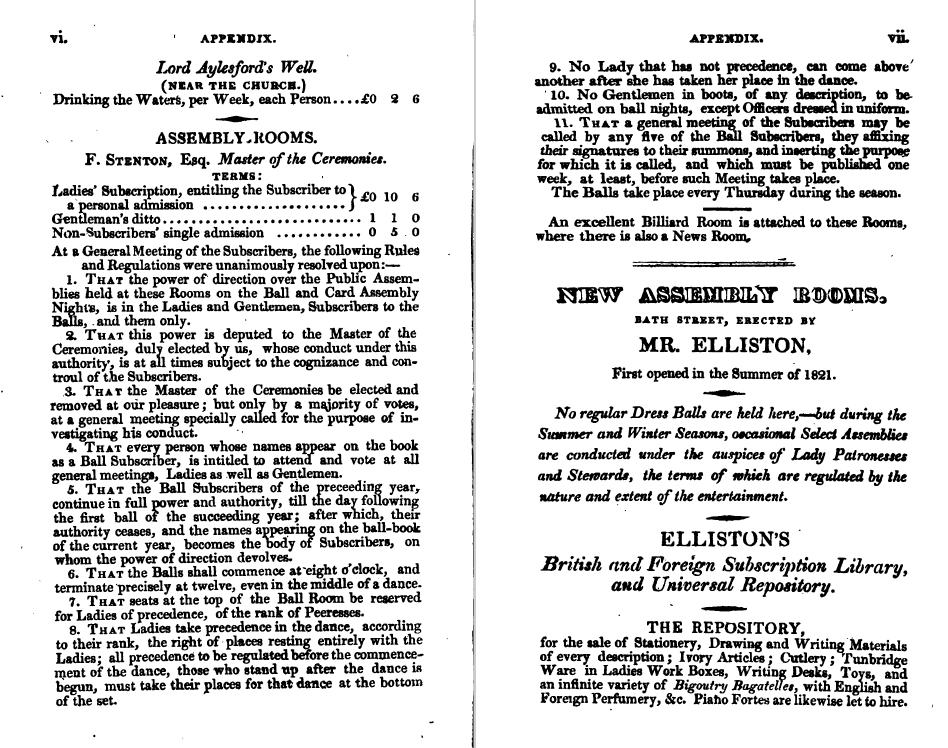 Rules of the Assembly Rooms
from "The Visitors' New Guide to the Spa of Leamington Priors, and Its Vicinity" by William Thomas Moncrieff (1824)

Leamington went in and out of fashion as a tourist destination throughout the early Victorian era - in fact it was one such slump in 1838 that spurred the townsfolk to send a deputation to the new Queen to ask for a Royal Charter for the town under the aegis of yet another Master of the Ceremonies, Major Abiathar Hawkes, (another half pay Army Officer). By the 1870s the Upper Assembly Rooms was felt no longer necessary and demolished. Sadly nothing of it remains today although many other buildings of the period can be seen in the town.