This April we are once again blogging along with the A-Z Blogging Challenge. Our team of one-place studiers will be sharing some of the treasures to be found for a one-place study, particularly around the theme of Visualisation, our Shared Endeavour for 2016. 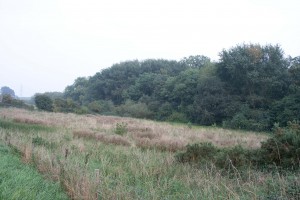 One September morning found me trudging through the dew along the edge of a field in Wing Buckinghamshire. Being unaccustomed to the English right of access to the countryside and not wanting to have accidentally strayed somewhere I shouldn't, I was a bit nervous to see a group of three coming towards me. However this encounter would likely have passed by with just nods and "Good morning"s, except one of them said

"Is that the Wing walk leaflet in your pocket?"

This leaflet, containing a map and commentary of a walk around Wing featuring Long Spinney, a small patch of woodland that I was presently walking past, was indeed poking out of my pocket.

"We've been looking for that, we didn't know any copies still existed!"

It transpires that the group of three were part of a larger group considering a project to tidy up the Long Spinney and resurrect the now-defunct walk (so perhaps I shouldn't have been poking around there after all). I was able to have a good chat with them, including the usual "What's someone from NZ doing in Wing?" giving me a chance to tell them all about my one-place study, chat about the leaflet itself, and their plans for Long Spinney.

I'd found the leaflet in my B&B, although I was previously aware of it as a scanned version was floating round the internet some years ago. I may have been contemplating taking the leaflet home with me, but thanks to my encounter I knew it was a rarity so left it where it was and took photos instead, and gave the Long Spinney team the B&B contact details so they could pop round and get a photocopy of it. So it wasn't just the leaflet itself or the information on it that proved useful for my study, it also prompted an entire conversation!

You may find leaflets or booklets for your place too. If there's anything of interest to see or do, either now or in the past, there's probably a leaflet. If there's a church there's most likely a leaflet about current services (religious and otherwise) that it offers, and perhaps even a booklet about it - I've got four different 20th century editions of the booklet about my church, thanks to eBay. Good places to find current leaflets are the nearest information/tourist centre, library, community halls and churches.